Mapping E-Participation on the Local Level. 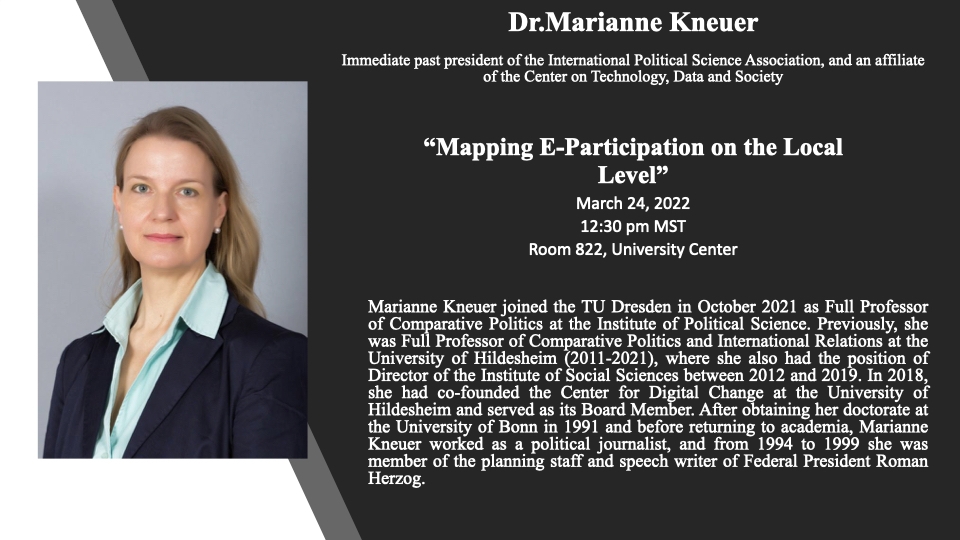 Center on Technology, Data and Society (CTDS) hosts Dr. Marianne Kneuer, the immediate past president of the International Political Science Association, and an affiliate of the CTDS. Dr. Kneuer will be presenting on the topice: Mapping E-Participation on the Local Level.

Dr. Marianne Kneuer joined the TU Dresden in October 2021 as Full Professor of Comparative Politics at the Institute of Political Science. Previously, she was Full Professor of Comparative Politics and International Relations at the University of Hildesheim (2011-2021), where she also had the position of Director of the Institute of Social Sciences between 2012 and 2019. In 2018, she had co-founded the Center for Digital Change at the University of Hildesheim and served as its Board Member. After obtaining her doctorate at the University of Bonn in 1991 and before returning to academia, Marianne Kneuer worked as a political journalist, and from 1994 to 1999 she was member of the planning staff and speech writer of Federal President Roman Herzog.